… in this digital age it’s great to see signwriting is in a renaissance.

Creativity In Retail – the life n soul of you business 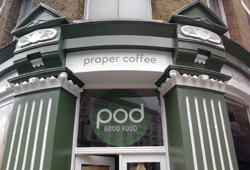 Creativity on all levels has always played a huge part in attracting clients through the door in retail … the space today remains wide open for you the in-store designer, to create the creative sign statement that will ignite the imagination of existing clients and brand new ones too, as the swing toward retro and craftsmanship shows signs of being here to stay.

NGS are active in the area of new sign trend, surfaces finishes and visual product development – we work closely with our clients along the critical path, from concept, through design development to installation or hand painting.

With a multi dimensional interiors and product design based background, Nick Garrett offers clients not only experience in sign typography, but a range cost effective visual processes and commercially sound solutions –

… working as a product designer for major US and UK retailers has given me priceless skills that value add to your business.

Applying a creative logo to an interior retail display is a fairly straight forward process but moving a logo and brand ID from the PC design screen to a large exterior surface area often requires a different skill set or knowledge base – the ability to augment the design in order to override perspective and foreshortening issues in the larger than life, real world setting –  just one skill a design based sign creative can bring to the table.

By adding a touch of distress (see Foote’s above) the logo transformation takes on a sense of having been there a long time: established and successful… yet gleaming new!

Contrastingly by using clever hand masking techniques a silk screen finish can be created for the clean cut logo.  See below.

An interesting London brand whose ethos has successfully channelled into Visual Display is Dover Street Market, the hybrid London store famed for it’s creative collaborations and avant-garde fashion following when (on behalf of Art-loving restaurateurs ‘Les Trois Garcons’) they created ‘Future of Black’.
Step inside DSM and you know you have arrived at the creative edge of instore visual design.

Visual Merchandising as a discipline that now has everything to do with the visual and less (at least directly) with merchandising, proving that communicating brand message through store space is the focus, far outweighing the product itself.

Of course Apple is probably the greatest example of a design led company, emerging out of product obscurity just over a decade ago and on the back of a huge creative push turned it around.

The exquisite and infinitely influential taste of Steve Jobs himself has long been a matter of doctrine in the tech world – it continues to define the perfect example of how to shape the brand myth, PD and ID seamlessly.

Kevin Kelly’s remarks after his death expressed the general sentiment:

“Steve Jobs was a CEO of beauty. In his interviews and especially in private, Jobs often spoke about Art. Taste. Soul. Life. And he sincerely meant it, as evidenced by the tasteful, soulful products he created over 30 years.”

One only has to look at Job’s design path to realise the enormous influence of  Dieter Rams, for many decades the chief designer at Braun. (Rams’ influence came to Apple largely through its own chief designer, Jonathan Ive, who has long acknowledged the debt.).

Theories have been developed as to how to best communicate through letterforms, especially when an idea needs to be transmitted as easily as possible. What is for sure is that words are the best tool in the hands of the designer, but that the graphic designer has entered an era of powerful poetics.

Bringhurst explains while introducing the first chapter of his timeless “The Elements of Typographic Style”: Typography exists to honour content.

Above:  a grunge cafe sample board – ‘Flat White’ informs us of it’s Australian origins.

The typographic experience can be as emotional as any pictorial masterpiece – yet is does so much more. This notion is exemplified by the “Coming Together” campaign for FontAid by The Society of Typographic Aficionados (SOTA) showed that despite the common saying that “a picture speaks a thousand words”, sometimes all you need is just a single character.

The “Coming Together” typeface shows us the power of a single character.

Adding sustainable creativity to a marketing program is literally adding business depth … it can be a tremendously enjoyable process.  Of the businesses that are moving ahead today I lay the challenge to find one that is not centred around design.

UK is a hub of design creativity and guess what… we intend to write it on the wall, window or wherever.

One thought on “NG Signs: Creativity In Retail… The London signwriter.com”